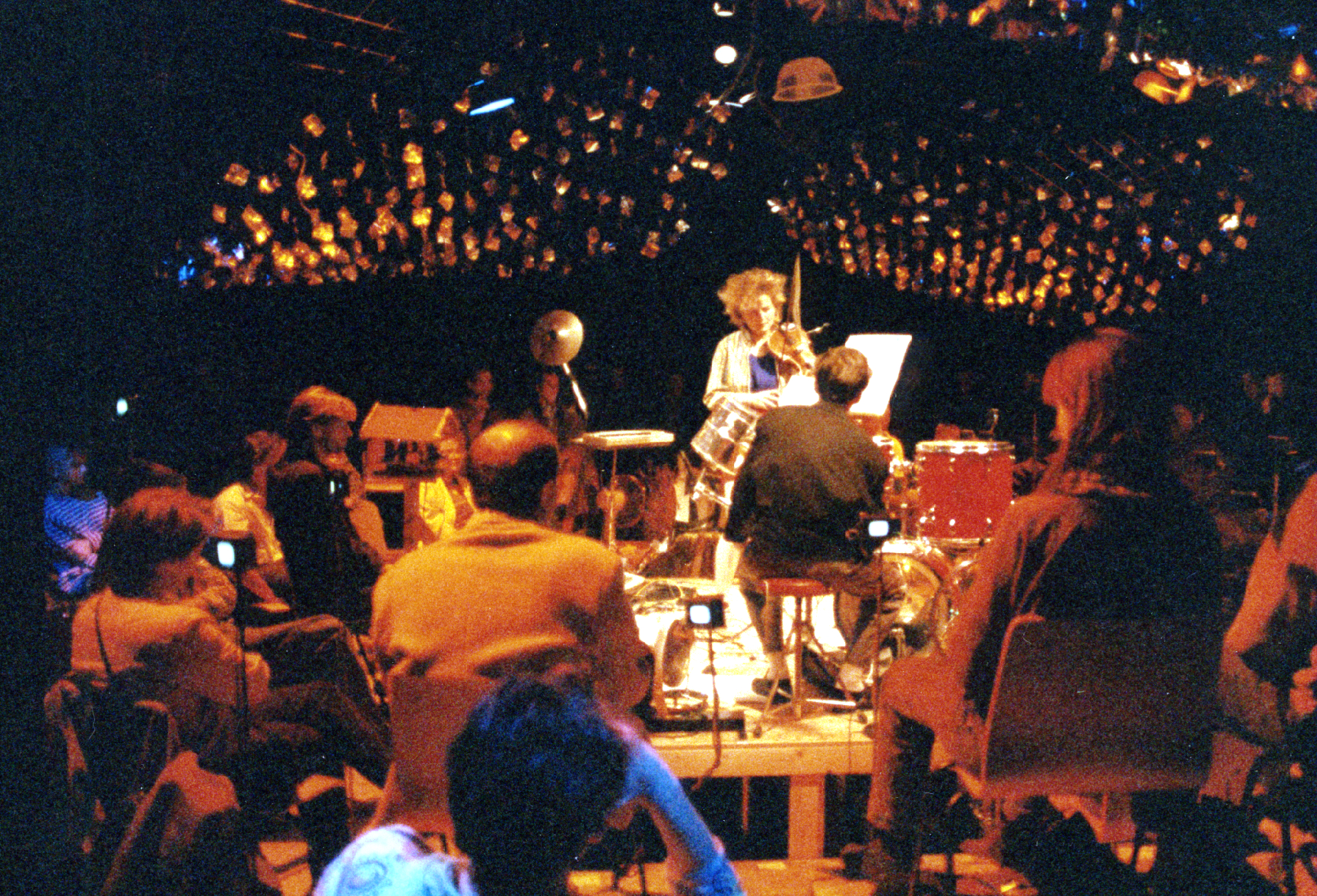 The music project Corenicken (1991) is a large-scale combination of performance/instalation, a dynamic work with sounds coming from all different directions, generated by all kinds of different sound sources. Corenicken is performed by Huba de Graaff and a percussion player, Eva van der Meer/Peppie Wiersma.
Instead of using a P.A. (Public Address) system, Huba de GraaffI tries to reach each individual in the audience–i.e. I.A. (Individual Address). This effect is also achieved by the intimacy of the space in which the performance takes place, and by having the audience surround the musicians. All the different audio and visual sources are placed above and in front of the audience, beneath their chairs and even behind them, in such way that each listener will have his/her own personal experience of the performance.

Listen to the Japon Fuzz:

Corenicken comprises the following elements : a central controlling computer, rhythm machines, record player, computer violin and percussion instruments, all placed on a small stage. In the midst of the audience are 32 miniature television monitors, which transmit independent animation patterns and through their speakers, different voices of the composition.
At various points in the composition, Huba de Graaff puts on the “Japon Fuzz’, a tin dress filled with electronics so that it can produce beautiful fuzz and feedback sounds in response to her movements.
Above the audience are suspended three elliptical grids with 768 small piezo-ceramic elements –the same material used in digital watches to produce beeps. (Read more about the piezo-composition:)
Huba de Graaff has developed her own computer system to generate synthesized sounds, based on a series of pulse-train functions and movements (moving soundscapes) through the grid.

On stage there is a stand with two computerised rotating speakers. Speed, direction and distance are controlled by the computer. By connecting a sound to a moving speaker, Huba de Graaff tries to alter the medial function of the different transducers as if they are quasi-sources. In the ‘canal’ behind the audience is the world of the ‘Blimpies’, self-propelled, light-emitting, translucent sculptures which produce a tuned ‘whee-whoo’-sound. A MIDI-fountain and waving plants also contribute to the composition. In Corenicken all the equipment is controlled live during the actual performance. The concert creates a special sound experience with an unusually wide dynamic scale.

Huba de Graaff has given concerts and lectures with Corenicken 1991-1993, in Amsterdam, Rotterdam, The Hague, Weimar (Germany), Buffalo (U.S.A.) and Gent (Belgium); part of the concert has been broadcast on Dutch Television.